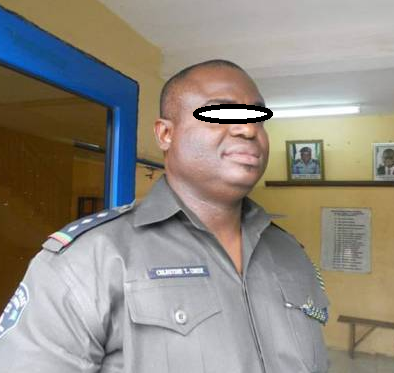 A businessman has dragged a police officer who allegedly slept with his wife to court.

Clement Asuquo Etim initially narrated how he was allegedly tortured and framed up by a senior policeman, CSP Celestine Umeh after he caught him in bed with his wife Lawrentia Asuquo Etim (read here).

Mr Etim has now filed N200m fundamental rights enforcement lawsuit against the Nigeria Police Force for arresting, torturing, and framing him and two eyewitnesses on trumped-up charges, according to Sahara Reporters.

The aggrieved husband joined in the suit the Commissioner of Police in Akwa Ibom State, the Officer-in-Charge of General Investigation at the State CID, SP Ekene Nwosu, and a Chief Superintendent of Police, Umeh.

In a 46-page court document seen by SaharaReporters, Etim stated that Umeh violated his fundamental right to private and family life as guaranteed by Section 37 of the Nigerian constitution when he intruded into his matrimonial home at Aba Ukpo Estate in Uyo and had an amorous affair with his wife.

A Lagos-based human rights lawyer, Inibehe Effiong, filed the lawsuit marked Suit No: HU/FHR.72/2020 at the High Court of Akwa Ibom State sitting in Uyo, and asked the court to enforce the fundamental rights of his client to the dignity of the human person, personal liberty, private and family life and freedom of movement.

Effiong asked the court to declare that, “The arrest and detention of the Applicant by the officers and agents of the 1st, 2nd and 3rd Respondents from 27th April 2020 till the 30th April 2020 without being charged to court for a known offence is unreasonable, unjustifiable, illegal, unconstitutional and a breach of the fundamental right of the applicant to personal liberty and freedom of movement as guaranteed by Sections 35 and 41 of the Constitution of the Federal Republic of Nigeria, 1999 (as amended) and Articles 6 and 12 of the African Charter on Human and People’s Rights (Ratification and Enforcement) Act Cap. A9 Laws of the Federation of Nigeria, 2004.”

The lawyer asked the court to declare that the invasive acts of CSP Umeh, “including his deliberate intrusion into the home of the applicant at Aba Ukpo Estate in Uyo Local Government Area, co-habitation with the wife of the applicant, and laying with the applicant’s wife on the matrimonial bed of the applicant on 27th April 2020 is grossly offensive, unjustifiable, illegal, unconstitutional and a breach of the fundamental right of the applicant to private and family life as guaranteed by Section 37 of the Constitution of the Federal Republic of Nigeria, 1999 (as amended).”