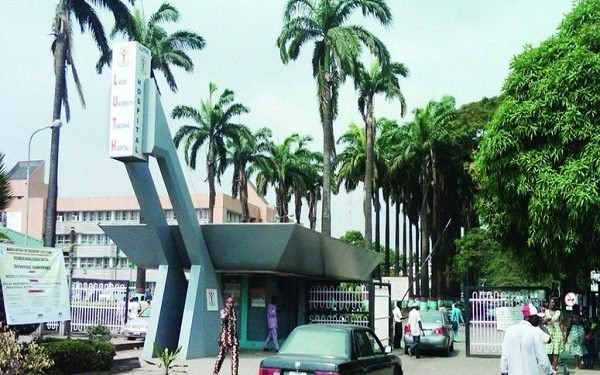 LUTH has reacted to allegations from a female relative of a patient who claimed that staff of the hospital conspired with her brother’s lover to hide him in the hospital so they can loot his money.

The woman, named Mrs. Ngozi Adenuga, earlier claimed that some medical and social workers at the Lagos University Teaching Hospital (LUTH) connived with her mentally unwell brother’s lover to hide him while withdrawing millions from his accounts.

Mrs. Adenuga, in a petition to the Area C Command, Surulere, alleged that all efforts by the family to take their brother, Solomon Akukwe, a former staff of Chevron, out of the hospital for proper medical attention has been met with resistance because his handlers only take instructions from his lover, Mariam Saidu, 28.

Mrs Adenuga claimed that one of Akukwe’s aides alleged that his lover moved the man to an unknown destination and was making plans to move his properties, including his cars.

She said the informant told her Saidu was also using the man’s Automatic Teller Machine (ATM) card to make alleged suspicious transactions while still at his residence in Lagos.

Adenuga alleged that her brother suffered periodic mental illness, which made them move him to a rehabilitation centre in Abuja for treatment where he met Saidu before they eloped to Lagos. Mrs Adenuga said that once in Lagos, Saidu connived with hospital staff to hide her brother and loot his property.

She said those involved in the alleged plot were her brother’s lover, Saidu, a doctor at LUTH, Prof. Adeyemi, Matron, Alhaja Lateef and the hospital’s social worker Ms. Tade.

In a petition titled “obtaining by trick (OBT), conspiracy to deteriorate a man’s health and plans to hijack his wealth,” received by the Area Command on May 14, Mrs Adenuga urged the police to intervene in the matter.

However, LUTH, in a response to the allegations, said it’s the other way round and Mrs Adenuga has been the one with her brother’s ATM cards, phones and cheque book. To prevent further withdrawals from the sick man’s account, LUTH said social workers at their institution “facilitated the bank to place on embargo on further withdrawals from the account of the patient.”

In the statement signed by K.O. Otuneme, the Public Relations Officer of Lagos University Teaching Hospital, it was revealed that the patient was brought to LUTH by Ms Mariam Derwerns Saidu and her name was in their records as his next of kin.

The statement adds that Mrs Adenuga was in possession of the patient’s phones because patients in the psychiatric wards are not allowed to keep their phones.

Caregivers soon noticed that while the patient was on admission, his sister, Mrs Adenuga, was always bringing cheques for him to sign on his hospital bed.

When the patient finally got access to his phone, he noticed “numerous unauthorized debit alerts”. They added that this made him “plead with his caregivers to retrieve his ATM card, phones and cheques from his sister.”

“Mrs Adenuga handed over the phones on the 30th March 2020, but refused to hand over the ATM cards and cheques till date,” the statement adds.

They also said that when social workers facilitated the collection of the patient’s statement of account from his bank, it was discovered that 12 million Naira had been withdrawn between Feb 7 and April 30.

As a result, they requested the bank to place an embargo on withdrawals.

They added that Mrs Adenuga has been insisting on them discharging her brother despite the fact that the patient “isn’t fit for discharge”.

They said she has been problematic because she couldn’t have her way.

“Mrs Adenuga has been problematic, most unreasonable and uncooperative in the treatment of her brother and obviously has not demonstrated altruistic concerns for his well-being,” LUTH said, adding, “Her visits to the patient often left the patient distraught and upset.”

LUTH added that they have written to the Lagos State Commissioner of Police requesting an investigation into the “unauthorized dealings in the bank account of the patient in order to identify the perpetrators and beneficiaries and to take necessary actions for the protection of the life and interest of the patient and for protection of our staff from further harrassment and threats from Mrs Adenuga and her cohorts.”

Read the full statement released by LUTH below. 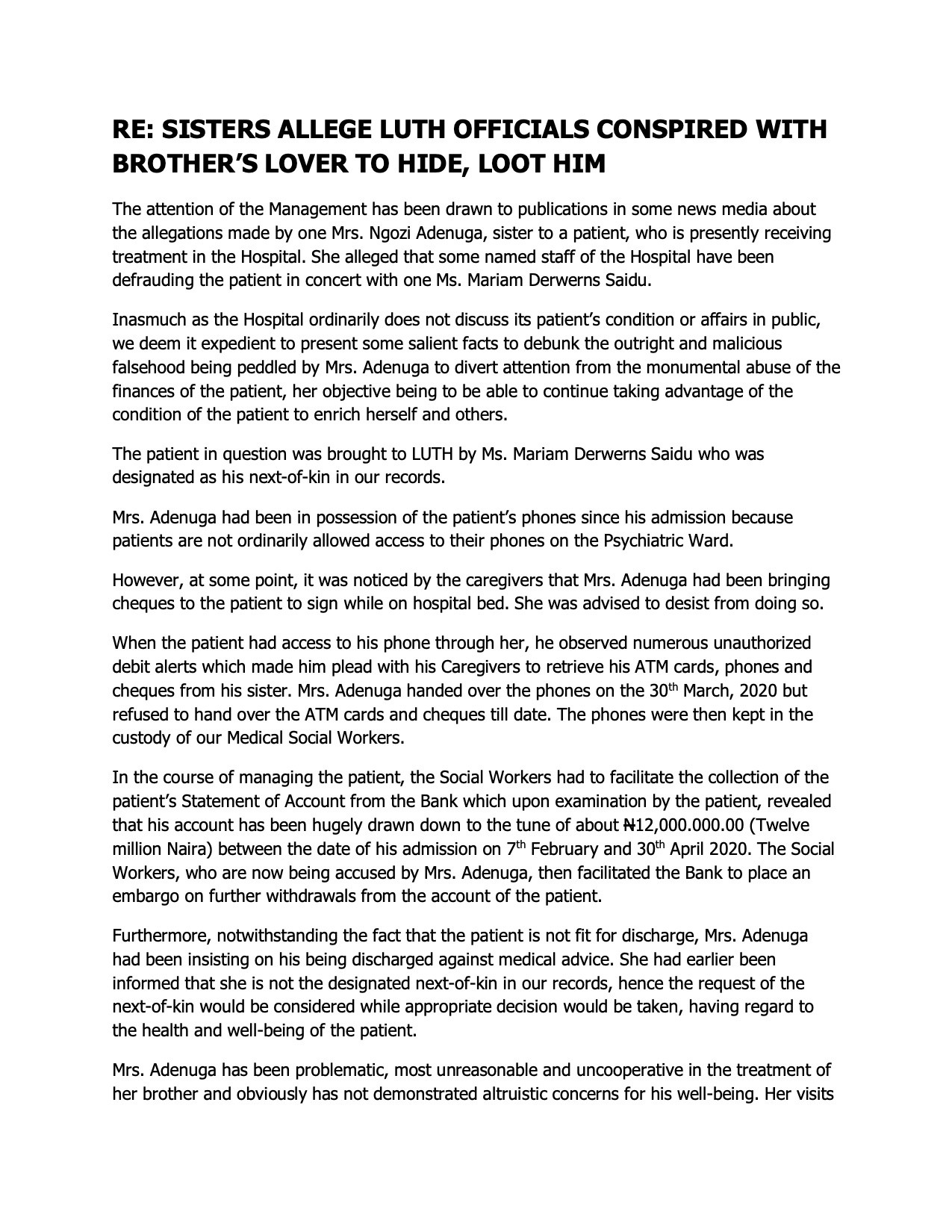 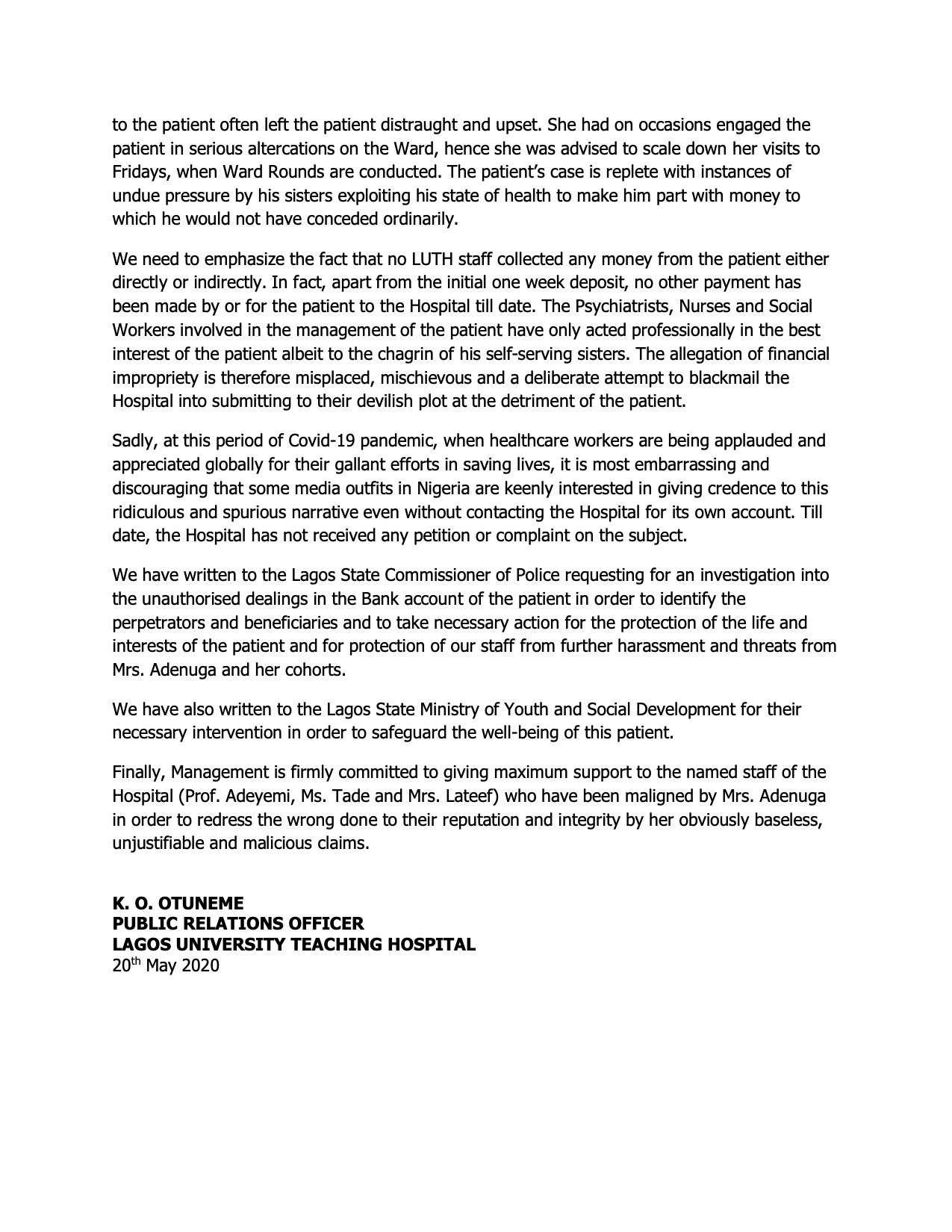